You can tell Jesse Jackson’s in the news again by looking at his shoes. You know. The ones with the teeth marks on them. From putting his foot in his mouth. Again. But this time, it’s a (presumably) friendly fire incident with Mr. Rainbow Connection fragging his party’s/constituency’s/race’s nominee for President. The question is, why? END_OF_DOCUMENT_TOKEN_TO_BE_REPLACED

I have. I rented a couple of DVDs for my wife and I to watch. One was Vantage Point, an action/mystery/thriller about a Presidential assasination, told (and retold) from a variety of points-of-view. It was surprisingly good…”surprisingly,” because it came – and went – at the box office so fast, I’m not sure it lasted a week. If you like intelligent movies that make you think – and pay attention – you’ll likely enjoy this one. However, if you’re like most of the movie-going public, maybe not. And that brings me to my rant du jour… END_OF_DOCUMENT_TOKEN_TO_BE_REPLACED

…what is the answer? In anticipation of giving Sprint the same consideration they’ve been showing me for low these 12 years, I visited my friendly, neighborhood AT&T Phonaporium today. The 3G iPhones (or iPhone v. 2.0 for those of us outside the Macinverse) will be available this Friday. I was keen to learn what all this über-coolness is gonna cost me – or at least get a picture of how AT&T’s version of rape differs from Sprint’s. I have to admit – my first impressions were pretty favorable. The AT&T staff was cheerful (unlike the generally sullen folk at Sprint…kind of like the diifference between flying Southwest versus American Airlines). The guy I worked with was knowledgeable, and seemed genuinely interested in steering me to the best plan for me – and not whatever AT&T has a spiff on this month. END_OF_DOCUMENT_TOKEN_TO_BE_REPLACED 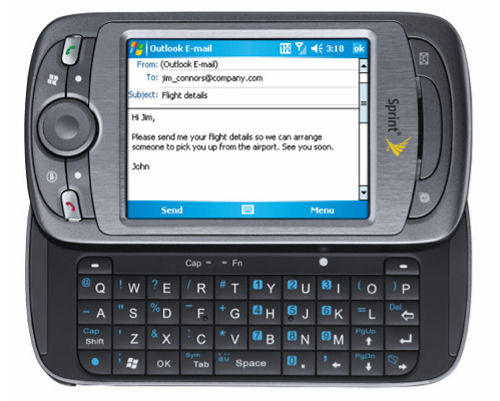 You are looking at the bane of my existance.

Okay, to be pefectly accurate, you’re looking at a picture of the same model phone (an HTC Mogul from Sprint) that is the bane of my existance. In all the years I’ve had a cell phone, I have never owned a bigger pile of steaming yak droppings as is this phone. I have never dealt with a bigger bunch of lying rat bastards than the ones that sell and service this phone. And I will never make the same mistake again. Allow me to explain… END_OF_DOCUMENT_TOKEN_TO_BE_REPLACED

Went to see a flick the other day (my birthday, to be precise) with my 10-year-old daughter.

I don’t go to see a lot of movies any more. Part of it is that my wife doesn’t like to go. Part is that they don’t make a lot of movies that I find interesting. And most movies espouse an outlook on life, morals, and politics that I don’t share. But I found myself in the theatre on Saturday, arriving after the lights went down, but just before the trailers started running. And I discovered another reason I don’t go to the movies much anymore.

Now that’s probably not much of a newsflash for most of you, but I frankly don’t get out much. I work about 90% of the time in my home office, so I don’t rub elbows with the “muddled asses yearning to get free (stuff).” END_OF_DOCUMENT_TOKEN_TO_BE_REPLACED

This is a shameless plug for my wife’s company. I say this in the spirit of full disclosure. VectorRight.com sells conservative-themed merchandise (shirts, caps, bumper stickers, etc.) I did the design work for her on the front end, and all the tshirt and bumper sticker designs as well. There’s some free stuff there, too – a bunch of Photoshopped pictures that feature Bill, Hillary, and some other lefties. It’s a completely partisan site – forget “fair and balanced,” unless your idea of fair is that she’s got a site and there are probably a dozen liberal merch sites out there competing with her.

So if you’re in the mood to see some decidely politically INcorrect stuff that trashes the Left (as opposed to what you’re USED to seeing, where the Left trashes the Right but calls it “all in good fun” – go for it. And buy something. I don’t make a dime off it – I did all the work “pro bono” which is Latin for “Honey do” (if you know what I mean, and if you’re a married guy, you do). But in order to perserve a more perfect union (mine) I’d consider it a personal favor if you hit the site, looked around, and found something nice for the Conservatives in your life.

About this election thing. Color me depressed/worried/fatalistic/tired/ready to go hide somewhere. In case you don’t already know this about me, I’m a proud Conservative. Note, I did not say “Republican” nor did I imply that I’m a “compassionate” conservative or any such nonsense as that. I’m bummed because no matter WHO wins in November, we’re in for a rough ride, from my point of view. END_OF_DOCUMENT_TOKEN_TO_BE_REPLACED

I like water. I like to drink a lot of it, as it is probably the only thing in my diet that tastes good, is good for me, and has zero calories. (Now if only they can come up with a zero calorie steak…)

Years ago, Robin Williams did a bit that went like, “Ooh…when I wanna blow a buck on a bottle of water, I buy Perrier!” That was back when buying water – any kind of water – seemed pretty stupid, as the stuff that came out of the tap tasted pretty good. I howled. Then I moved to Amarillo.

I don’t know what’s in the water up here, but whatever it is, it tastes foul and evidently fouls up your teeth. We still bathe in it (by necessity), but we’ve taken to buying water by the three-gallon jug, so our teeth won’t fall out. END_OF_DOCUMENT_TOKEN_TO_BE_REPLACED

This is a difficult letter for me to write. We’ve been together for a long time – really since 1987. Oh, sure, we flirted before that, with Word DOS, but our relationship really became serious with the release of Windows 1.0. You had to know the level of my commitment to our relationship…I mean, after all, back in 84 when I bought my first PC, I had a choice even back then – an 8086 PC or a Mac. For me it was simple. A PC gave me more bang for my buck – the Mac was cute, but seemed more expensive toy than a real, working computer. Back then, it was like dating a foreign exchange student – I did my best to learn your language, ever hopeful you’d even try and learn mine. (I’m probably a handful of people that remember the painful joke that was EDLIN.) END_OF_DOCUMENT_TOKEN_TO_BE_REPLACED